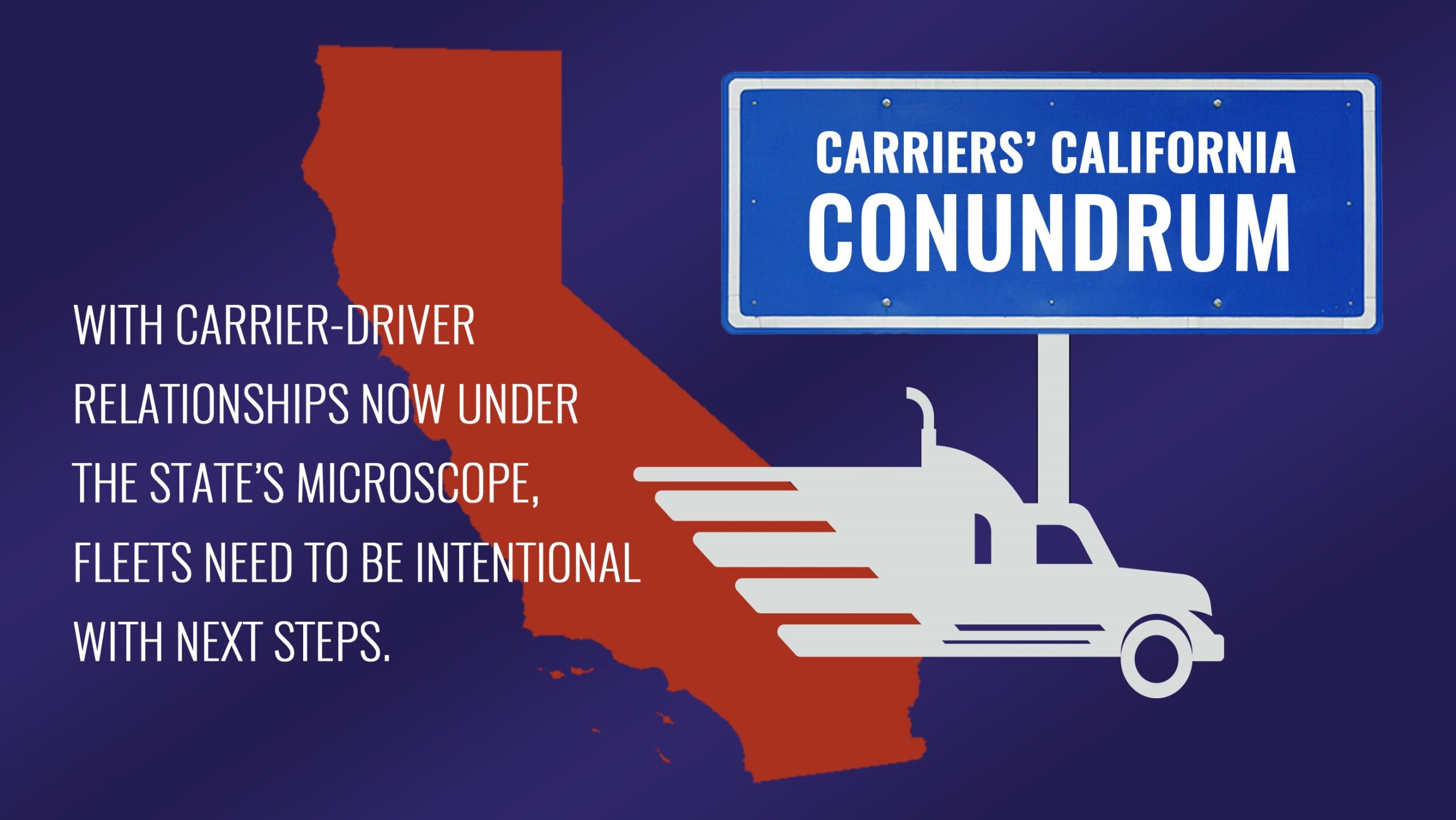 NO MATTER FLEETS’ NEXT STEPS IN CALIFORNIA, DRIVER COMMUNICATION AND SUPPORT ARE STILL KEY IN DETERRING SCRUTINY UNDER STATE’S AB 5 LAW

A years-long legislative and legal battle over the future of independent contractor drivers in California hit a wall on Thursday, June 30, when the U.S. Supreme Court declined to take up a lawsuit challenging the state’s AB 5 law’s application to trucking — and to motor carriers, specifically.

Assembly Bill 5 will now imminently apply for trucking operations. That means motor carriers with operations in California, who have drivers based in California, or who work regular loads to and from California, may need to take steps, potentially dramatic ones, to ensure they’re not running afoul of AB 5’s bounds and opening themselves up to legal scrutiny by the state or in civil court.

NTI recently spoke with attorney Doug Grawe, of The Grawe Group, about how carriers can navigate this new legal landscape in California and beyond, and how carriers should position themselves to weather any possible legal challenges brought by the state or in civil court.

While AB 5 effectively prohibits carriers from working with independent contractor drivers in the state (more details on that below), carriers’ key priorities in this shifting environment should be to avoid situations in which lawsuits could arise, says Grawe, and that means ensuring drivers are satisfied and that their needs are met. That goes for California, especially, but it’s good practice for all fleets, no matter in which states they operate.

“Litigation usually stems from some form of grievance,” says Grawe. The three most common areas of friction that lead to lawsuits are when a driver is injured, feels their pay is incorrect, or they’ve offered feedback or complaints to the company that have gone unheard. “When putting together any kind of plan for your drivers or independent contractors, make sure your drivers are protected and feel cared for in all three of those areas,” says Grawe.

“Recruiting doesn’t end when a driver is seated in your truck,” says NTI President and CEO Leah Shaver. “It’s important to continue to communicate with contractors to help them understand their responsibilities in the relationship, and where a fleet’s responsibilities, as the contracting company, don’t apply. That outreach to drivers can’t stop when they sign the contract. AB 5, and questions about classification spreading across the country, give us an opportunity to re-ignite efforts around messaging, communication, and policies and procedures internally and externally regarding contractors,” said Shaver. “That doesn’t necessarily mean you have to stop doing business with contractors outside of California, but it does mean to double down on efforts to create a fleet of satisfied and happy drivers, whether they’re ICs or employees, and that every driver knows where to go and what to do if they have questions or issues.”

For independent contractors, fleets must ensure that ICs and owner-operators understand that they’re not covered by worker’s compensation should an injury happen on the job. Explain to them the benefits of buying occupational accident insurance (OAI) coverage, and how it can protect them if an injury does occur and prevents them from working. Also be sure they understand that OAI usually doesn’t cover medical bills, but can help cover expenses like loss of income, truck payments, and other overhead costs, such as insurance. It’s also a good idea to explain that health insurance would help cover medical bills stemming from workplace injuries.

When a driver is injured and suddenly facing loss of income and expensive medical bills, that’s often a scenario that can lead to a lawsuit against a fleet, in which the driver, whether an IC or a company employee, sues the fleet to cover those costs.

So it’s important to be clear with ICs up front so they understand this dynamic and can make decisions accordingly. And for company drivers, be sure to offer adequate worker’s compensation benefits and that drivers understand and know how to use those benefits when necessary.

Regarding payroll, everyone in a carrier’s organization needs to know how the company’s pay structure works and have a good auditing process in place, “so it’s done correctly and that drivers walk away feeling good about their pay and that they were paid fairly and correctly,” said Grawe. If drivers feel their pay is wrong and that their concerns aren’t heard, grievances — and thus lawsuits — can arise.

When drivers, whether contractors or company employees, raise concerns or issues to managers or dispatchers, have protocol in place to address those concerns or complaints. “Whether someone is an independent contractor or an employee, they want to feel like they have a voice,” says Grawe. Listen to your people, and if a driver brings up a good point, talk through it and see if there’s something you need to change.”

Also, as explored in the NTI blog last month, it’s important to respect ICs’ independent status when working with them in states outside of California so as to protect your fleet from any claims of misclassification.

Fleets with California operations, even limited runs into and out of the state with independent contractors, will need to strike a balancing act of ensuring they remain compliant with AB 5 while trying to meet capacity commitments to shipper and broker customers.

Enacted by the state in late 2019, AB 5 has been on hold for motor carriers for the past two years, pending a legal challenge led by the California Trucking Association. However, with the Supreme Court on June 30 declining to take the California Trucking Association’s appeal, AB 5 will now apply to trucking operations, with enforcement beginning as soon as this week.

The law implements a three-point test to determine whether an employer (like a motor carrier) can legally contract with a worker (like an owner-operator running under a larger fleet’s operating authority). In nearly all cases, the traditional independent contractor / leased owner-operator model would fail the three-point test, so fleets who do utilize independent contractor drivers in California could be subject to lawsuits, a state investigation, and fines and punishments for lack of compliance.

This video recap from Trucksafe Consulting, featuring Grawe and trucking-focused attorney Brandon Wiseman, provides a great deep dive into AB 5 and how it relates to trucking, as well as the law’s immediate and potential longer-term impacts on motor carriers and trucking at large.

Fleets’ next steps for California (and potentially other states): Have a plan and consult with your advisors

Carriers who utilize contracted drivers within their fleet will likely need to take some big operational steps, if they haven’t yet, to protect themselves from legal exposure to AB 5, and potentially other state laws that could arise after the Supreme Court’s refusal to hear the appeal. Those steps could include pivoting part or all of their business into a brokerage, converting drivers from independent contractors to company employees, ending California operations entirely, or other variations.

For fleets who plan to convert ICs to company employees, offer drivers choices so they feel like they have a say in the process and in their future, says Grawe. Avoid creating rigid plans dictated to drivers as a one-size-fits-all.

Motor carriers with any operations in California, even just a single driver running in and out of the state on a regular basis, need to consult with all of their available experts, says Grawe.

Grawe recommends consulting with tax experts, accountants, compliance specialists, your operations leaders, recruiting and HR managers, and attorneys to determine how to proceed in this new legal landscape. “This isn’t a one-advisor decision,” he says.

For carriers opting to convert their ICs to company employees, “have a plan for every aspect of your business,” Grawe says, from recruiting and dispatch to payroll and an analysis of how it will affect operations, revenue, costs, and profits.

Also, communicate fleetwide not only with drivers, but with dispatchers, recruiters, and other personnel, about why the company must undertake these changes, and why the changes are good for drivers and good for the company.