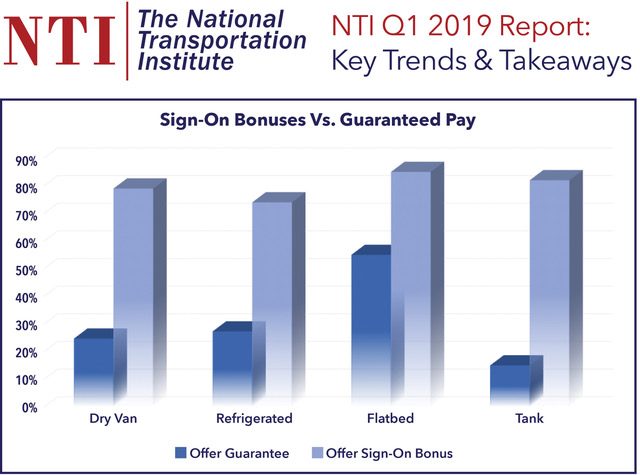 NTI’s quarterly study of key driver compensation categories found that, while the acceleration of pay moves has decreased, the pay changes that were made do rank as substantial. The trends from Q1 of 2019 point to the continued difficulty in attracting and keeping highly qualified drivers.

KANSAS CITY, MO. – June 3, 2019 – The National Transportation Institute (NTI), recognized as the principal authority for professional truck driver and owner-operator compensation in the trucking industry, noted a significant change in the pace of pay moves by carriers and historic mileage pay rates within the findings shared in its National Survey of Driver Wages report (NSDW) for the first quarter of 2019. Featuring a process that includes proprietary research tracking more than 70 unique attributes, the NSDW is distributed exclusively to NTI subscribers.

In its quarterly study of key driver compensation categories for OTR and Regional fleets, NTI found that, while the acceleration of pay moves has decreased, the pay changes that were made do rank as substantial. According to NTI, the trends from Q1 of 2019 point to the continued difficulty in attracting and keeping highly qualified drivers. The Q1 findings in the NSDW make note that the industry is reaching unchartered territory in the area of mileage pay, with rates of up to 65 cents per mile for solo drivers.

“Our subscribers tell us that, while freight has dropped and driver churn (turnover) has increased, the need to monitor driver pay attributes that produce desired outcomes remains especially high. Some of these outcomes include referrals, safe, productive driving and fair compensation for down time. We’re in a market with near full employment, and driver expectations are raised after a record year in 2018. In these conditions, the driver situation changes rapidly,” observed NTI Chief Operating Officer Leah Shaver.

The 2019 Q1 National Survey of Driver Wages report is available through a subscription. To learn more about the report and how to subscribe, visit DriverWages.com.

About The National Survey of Driver Wages: The National Survey of Driver Wages is the gold standard of compensation research for Recruiting, Retention and Compensation executives at Dry Van, Temperature-Controlled, Flatbed and Tanker fleets nationwide to benchmark critical costs, monitor trends, and make strategically informed decisions. Based on proprietary research tracking more than 70 unique attributes of Regional and OTR driver compensation packages, the quarterly report enables its subscribers to monitor key industry information on mileage rates, accessorial pay, bonuses, benefits and corporate policies for both company drivers and owner operators at Publicly-traded and Privately-held For-Hire Carriers. Referenced as NTI’s best-known survey, and the only report to find such detail, this core product is used by fleet executives to feed critical decision making. To learn more about annual subscription options, for participants and non-participants, visit DriverWages.com or call 612-263-9983.

About The National Transportation Institute: The National Transportation Institute (NTI) was founded in 1995 with a goal of providing accurate and authoritative mission-critical benchmarks to truckload carriers on company driver and owner-operator compensation history and changes. NTI’s publications are used by insurers, consultants, carriers and shippers as well as nearly every equity analyst who follows transportation sector stocks. NTI’s largest subscriber base remains in the transportation sector’s Private Fleets, Publicly-traded and Privately-held For-Hire Carriers. NTI’s publications are widely used as a tool for fleet executives to understand the direction and velocity of the Class A and Class B CDL market wages and emerging pay strategies. To learn more, visit DriverWages.com or call 612-263-9983.