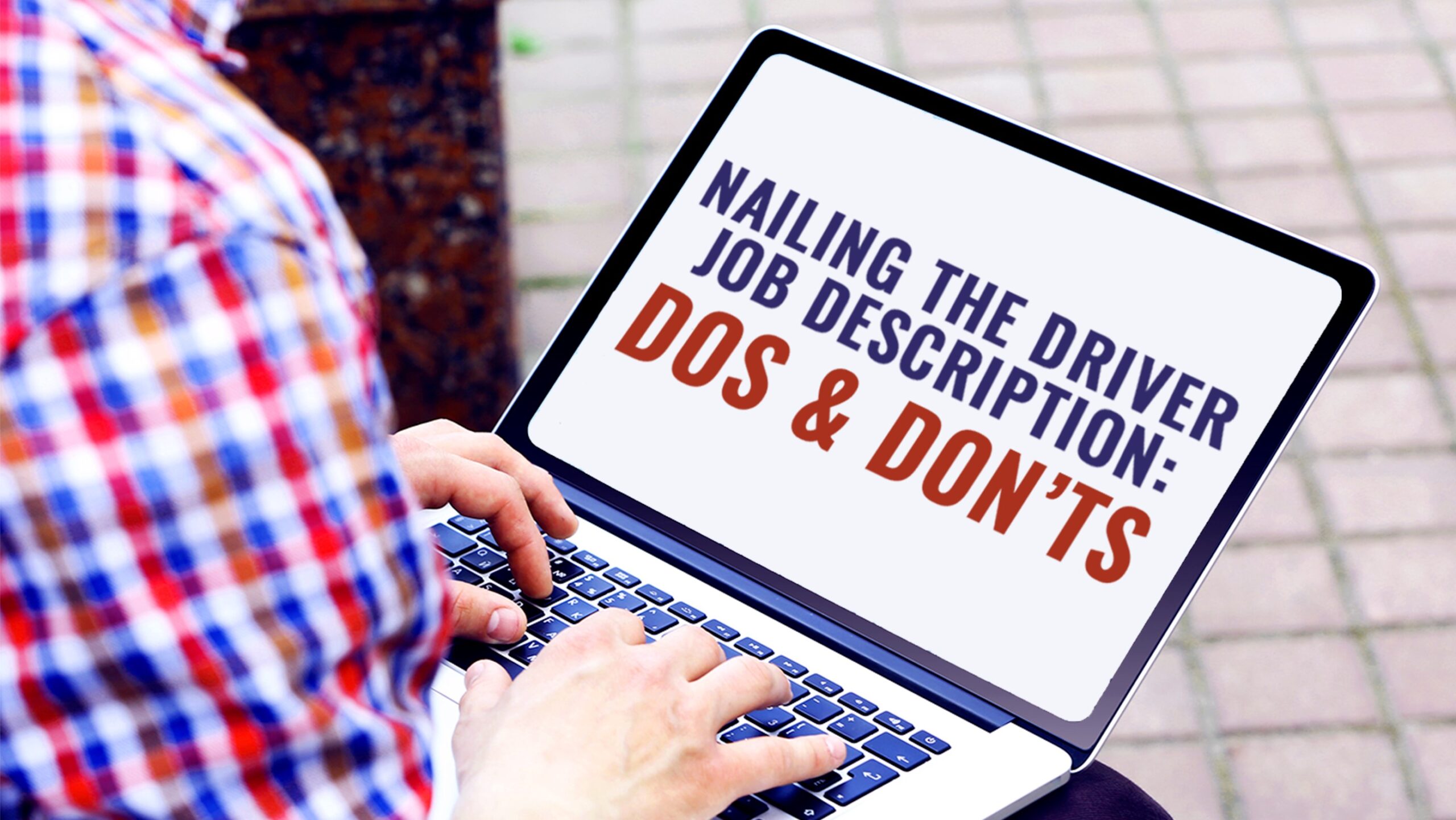 IN DRIVER JOB DESCRIPTIONS AND RECRUITING PITCHES, THINK RETENTION — NOT ONBOARDING. HERE ARE FOUR DOS AND DON’TS FOR YOUR FLEET

There’s a common refrain among many drivers in the industry, and we’re sure you’ve heard it: “All recruiters lie.” Or some other variation about recruiters using gimmicks or other misleading tactics to get drivers to commit to taking a driving job.

In reality, at nearly every fleet and across the industry, driver recruiters are honest, hard-working people who are a critical pillar in keeping carriers’ trucks moving.

So where does this disconnect stem from?

The root issue of this sentiment about recruiters is a pervasive expectation gap. Drivers perceive a job to be something other than it is when they commit to it, and after they show up for orientation and are onboarded, their expectations don’t align with the job, the pay, the benefits, the routes, the home time, the incentives, or some combination thereof.

This expectation gap leads to frustration and resentment, and it’s a major contributor to early turnover across the industry.

What’s the solution to mitigating this disconnect at your fleet?

It’s obviously a multi-layered issue, and the NTI team recently chatted with Beth Potratz, founder, president, and CEO of Drive My Way, to talk about steps fleets can take internally to be clearer with their job descriptions and in their recruiting calls with driver candidates — and ultimately to cut early turnover and boost driver retention by making the right hires. Drive My Way, founded in 2014 by Potratz, is part job board, part recruiting service, and the platform acts as a match-maker between drivers (who create detailed profiles and preferences with Drive My Way) and job ads posted by fleets.

Here are a few dos and don’ts for your job ads and recruiting pitches. Think we missed any? Drop us a line: info@driverwages.com

✅ Do: Recalibrate your recruiting goals to focus on retention — not quotas or onboarding

❌ Don’t: Try to sell jobs to drivers or convince them to take a mismatched role

“The most important thing for recruiters is to focus on assessment and selection” of the right candidates, said Potratz, by evaluating drivers’ qualifications and desires from their job, and then developing a relationship with the ones who match your open roles. “The goal is not to try to sell them something, or to throw everything in a job description and make it sound like ‘We’ll work with anybody,’ or ‘We’ll create whatever you need for your schedule,’” says Potratz.

Your recruiting department’s focus shouldn’t be on meeting hiring quotas or simply getting drivers in the door for onboarding. Rather, it’s to be a matchmaker: Find candidates that fit the job or jobs your fleet has available and hire them with an appropriate compensation package.

“If your pay program for your recruiters is heavily incentivized by numbers, specifically number of hires, it can become easy for recruiters to fill in the blanks with what they think they know about a job when they’re asked questions by driver candidates, rather than with what the job actually entails,” says Leah Shaver, NTI President and CEO. “Every company wants to be everything for every driver — but that’s not a good recipe for finding the right fit for your fleet’s job openings and for hiring drivers with long-term retention in mind.”

✅ Do: Paint a clear picture of what the job entails day to day

❌ Don’t: Go fishing for as many leads as possible and hope it works out

Lack of specificity in job descriptions or recruiting pitches is often a deterrent, says Potratz, not an attraction, for drivers evaluating job opportunities. Finding the right match — drivers who fit your fleet and who will be more likely to stay with your fleet — starts with accurately communicating job descriptions in ads and in recruiting calls.

With both your job ads and your recruiters’ calls with driver candidates, present a realistic view of the job so that drivers have a vision for what a day in the life at your fleet is like. “You want them to be able to picture themselves working at your fleet,” says Potratz. That includes details about the amount of labor required for their day-to-day during loading and unloading, the actual routes they’ll be running, accurate estimates of city loads and city pay, the facilities they’ll be delivering to and picking up from, whether they’ll be paid for deadheading and unloaded miles, even how long orientation is and whether they’ll be paid for it. “There should be no surprises,” says Potratz.

For job descriptions, that means including as much information as possible and being accurate about pay models and wages, detention pay and other accessorials, advancement opportunities, guaranteed pay rates and number of weeks offered, home time, how bonuses and performance incentives are paid out, when PTO kicks in and how it accrues, the number of paid holidays, and specifics about the company’s 401k match, for example. “We subscribe to: The more details, the better,” said Potratz. “Are you doing a good job articulating the employment value proposition from a driver’s perspective? That’s how your job ads should be framed.”

Also, explain equipment: What type of trucks do you operate? Are they governed? Are there in-cab camera systems? What triggers those cameras and who monitors them? What type of transmission do you spec your equipment with?

Lastly, talk about the size of your fleet, whether you’re growing, how stable your business is, the average tenure of your drivers, and opportunities for mentorship and career development. And don’t forget to include testimonials from your current drivers about why it’s great to work at your company. “All of this speaks volumes as to why they would want to work for you,” says Potratz. “And they’re all things that should be included in your job descriptions.”

✅ Do: Build cross-department training and create specialists in your recruiting department

Often, drivers’ expectation gaps stem from a disconnect between recruiters’ own perceptions of the job. Recruiters themselves may be unclear about aspects of the job they’re selling, or about their fleet’s operations and sales components, and they could unintentionally relay incorrect information to driver candidates. Recruiters also often face hiring quotas that can incentivize them to sell a dreamier version of a driving job than what actually exists.

“Recruiting departments and recruiters individually need a direct line of sight into sales and operations,” says NTI’s Shaver. “Hold enrichment sessions to coach your recruiters on routes and lanes, job description details, equipment, hiring criteria — anything and everything to help them accomplish their job of recruiting the right drivers for what your fleet offers.”

Shaver also recommends ensuring that recruiters can have their questions or driver candidates’ questions answered quickly by someone in sales or operations — or someone else in the recruiting department. Consider creating specialists for each type of driving job your fleet offers, so that your recruiting department can be a resource for itself.

✅ Do: Incorporate feedback into your recruiting processes

❌ Don’t: Be complacent or answer the same questions over and over again

Make recruiting an iterative process that’s always adapting to feedback, says Potratz. “Listen to your drivers and your recruits. If every time there’s a touchpoint with a driver, they’re asking a question or commenting on something or sharing something on Facebook — listen to that. Know what people are saying about you and what questions are being generated, and incorporate those answers into your recruiting process.”

For example, she says, if the same questions come up regularly in recruiting calls, answer them upfront or include them in the job description. If drivers consistently report leaving over a certain issue or recruits are lost over a certain information — address those holes and work to fix them.