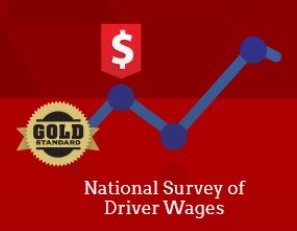 National Transportation Institute (NTI) released a supplement to its Quarterly National Survey of Driver Wages report, published in March, in response to rapid movement in driver pay. Due to the extreme volatility in driver pay at the end of the quarter, NTI has issued a supplement with updated data to provide subscribers with clear, actionable and current data on industry trends. NTI’s quarterly survey reports findings for the prior quarter and contains vital market insights for fleet executives, insurers, consultants, carriers, shippers and transportation equity analysts alike.

“Driver compensation is changing faster than it has since 2015. We’re seeing unprecedented movement in driver pay and we wanted to provide our subscribers with the most current and relevant information,” says Leah Shaver, NTI Chief Operating Officer.

According to the Q1 2017 supplement, the trucking industry is experiencing unusually aggressive and volatile movement in driver pay, which is evidence that the market is headed into a significant driver shortage that has all trailer types struggling to find drivers. According to the Q1 2017 supplement, the average per-mile pay increase is currently at $0.029.

Each quarter, the National Survey of Driver Wages provides its subscribers with in-depth comparisons of over 500 national and regional pay packages across 75 specific categories. This gives fleet executives the added ability to drill down on trends in per-mile, hourly and accessorial pay, bonuses, 401(k) plans and other benefits, rider policies, driver down time, and much more.

As a result of this rapid market volatility, maintaining a competitive driver compensation package has never been more important for truckload carriers.

About National Transportation Institute
National Transportation Institute (NTI) provides accurate and authoritative mission-critical benchmarks to LTL and truckload carriers across the United States. As leading trucking industry experts, NTI’s proprietary research publications serve as vital industry resources for insurers, consultants, carriers, shippers and nearly every equity analyst tracking transportation sector stocks. Now in its 23rd year of operation, NTI’s research has been cited by publications including the Wall Street Journal, BusinessWeek, USA Today and many others. Founded in 1995, NTI is based in Kansas City, MO. For more information, visit www.driverwages.com