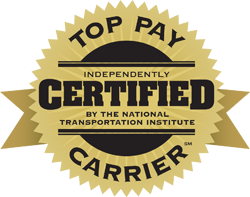 The National Transportation Institute sponsors its coveted Top Pay Carrier designation. To earn this elite award a carrier must qualify in three critical categories that together make professional driving a rewarding and secure career choice. The categories are top tier pay, health and retirement benefits and carrier stability.

The results of the evaluation process are weighted into a single index number and ranked against other carriers, creating a select group of top paying carriers. Top Pay Carrier designation strengthens an already elite organization.

Carriers that are awarded the Top Pay Carrier certiﬁcation from The National Transportation Institute have passed a rigorous, three part qualiﬁcation process. Each of these three areas is a critical component to the long-term ﬁnancial success, job security, retirement income, and health and wellness coverage that professional drivers deserve for their families and themselves. These elements are reviewed annually to assure that each carrier listed is worthy of the designation Top Pay Carrier.

In order to qualify in the pay category, a carrier must rank in the top 10% in driver income potential. This is determined on a weighted sample of driver pay at the one, three, ﬁve and ten year pay levels, including activity pay but not including sign-on bonuses, as determined by both a proprietary formula we have developed and actual W-2 income for these levels in the prior tax year.  Using this approach allows a driver to evaluate his or her long-term earning level, not just the “teaser” rates that occur in a competitive market.

The second category we evaluate carriers on is health and retirement. Utilizing the carrier’s health coverage plan in place for drivers, we model the health care premium cost to a driver over a ten years period. We additionally assume a covered family member has one ten-day hospital stay during that period for treatment of a moderately severe heart attack and is treated with stents. We additionally model the drug and treatment costs of treating one covered family member with controllable high blood pressure and another with insulin controlled diabetes. (If drivers have the choice of more than one plan, we choose the middle plan and/or deductible.) These results are then converted into a cost per-dollar of beneﬁt that the model driver receives, which is then ranked against national norms and other carriers.

Retirement beneﬁts are also modeled and assume a twenty-year career with the carrier. We use the carrier’s contribution rate/ percentage over the last ﬁve contributing years to develop the contribution amount made by the company. We assume the driver contributes just enough to receive the maximum employer contribution and that the investments grow at the average of the annual S&P 500. The results of these calculations are expressed as rate of return for every dollar invested and ranked against national norms and other carriers.

The results of this process are then weighted into a single index number and ranked against other carriers. This process creates a very select group of carriers who oﬀer drivers a solid pay, beneﬁt and retirement plan and exhibit long-term stability. The outcome of the driver pay model is weighted at 65 percent, the health and retirement at 25 percent, and carrier stability at 10 percent.

There is a minimum standard for subscription level in order to be assessed for qualification as a Top Pay Carrier. Click the button below to explore membership and your company’s pay and benefit evaluation.